Intense laser cluster interactions occur when small clusters of atoms, nanometres (billionths of a metre) in size, are struck with intense lasers. This happens, for example, when imaging biomedical samples on ultrafast timescales. However, the biomolecules can be damaged in this process by radiation. The discovery of slow, low-energy electrons produced by the intense laser cluster interactions provides a missing link in scientists’ understanding of the process, and could explain why biomolecules are damaged.

Intense laser cluster interactions were known to produce energetic ions and electrons, but now, in a paper published today in Physical Review Letters, researchers have revealed that relatively slow electrons or low-energy electrons are also produced in large quantities. 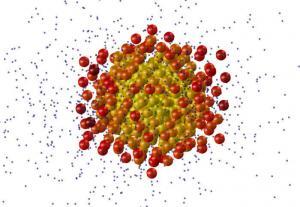 A team of researchers from Imperial College London, the University of Rostock, the Max-Born-Institute, the University of Heidelberg and ELI-ALPS exposed tiny clusters consisting of a few thousand atoms to ultrashort, intense laser pulses. They found that the vast majority of the emitted electrons were very slow and were emitted with a delay compared to the more energetic electrons.

Lead scientist Dr Bernd Schütte, who performed the experiments at the Department of Physics at Imperial, said: “Many factors including the Earth’s magnetic field influence the movement of slow electrons, making their detection very difficult and explaining why they have not been observed earlier. Our observations were independent from the specific cluster and laser parameters used, and they help us to understand the complex processes evolving on the nanoscale.”

When particles or clusters on the nanoscale (nanometers in size) are struck by intense laser pulses, various phenomena are produced, and most are well understood. However, the generation of highly charged ions has so far posed a riddle to researchers. This is because simulations predicted that electrons and ions would recombine, reducing the charge of the ions.

The discovery of slow electrons solves this riddle. Because they are released after the more energetic electrons, many of the slow electrons can escape the cluster of atoms. As a consequence, it becomes much harder for the charged ions to find partner electrons that they can recombine with, and many of them remain highly charged.

Senior author Professor Jon Marangos, from the Department of Physics at Imperial, said: “Researchers have been studying the energetic emission of particles from laser-irradiated atomic clusters since the mid-1990s.

“What is surprising is that until now the much lower-energy delayed electron emission has been overlooked. It turns out that this is a very strong feature, accounting for the majority of emitted electrons, and may play a big role when condensed matter or large molecules of any kind interact with a high intensity laser pulse.”

In order to understand the experimental observations, Professor Thomas Fennel and colleagues from the University of Rostock and the Max-Born-Institute simulated the interaction of the laser pulse with the cluster. He said: “Our atomistic simulations showed that the slow electrons result from a two-step process, whose second step relies on a final kick that has so far escaped researchers’ attention.”

First, the intense laser pulse detaches electrons from individual atoms. These electrons remain trapped in the cluster as they are strongly attracted by the ions. When this attraction diminishes as the particles move farther away from each other during cluster expansion, the scene is set for the important second step.

Weakly bound electrons get their final kick to escape from the cluster when they collide with a highly excited ion. As such correlated processes are quite difficult to model, the computing resources from the North-German Supercomputing Alliance (HLRN) were essential in solving the puzzle.